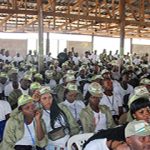 Statistically, 1 in 4 girls and 1 in 10 boys are sexually abused before the age of 18. Nigeria has been greatly affected by this menace of child sexual abuse. To curb this menace, it takes the collective effort of the society to tackle this issue.

With funding from the French Embassy under the PISSCA Project, with collaboration with the National Youth Service Corps (NYSC),  SOAR Initiative trained over 150 corps members to be advocate against child sexual abuse in both Benue State and Abuja.

On the 21st september, 2018, 79 trained and active advocates of Soar Initiative  received there certificate of participation in the one year of the youth advocate project during the one day stakeholders meeting.